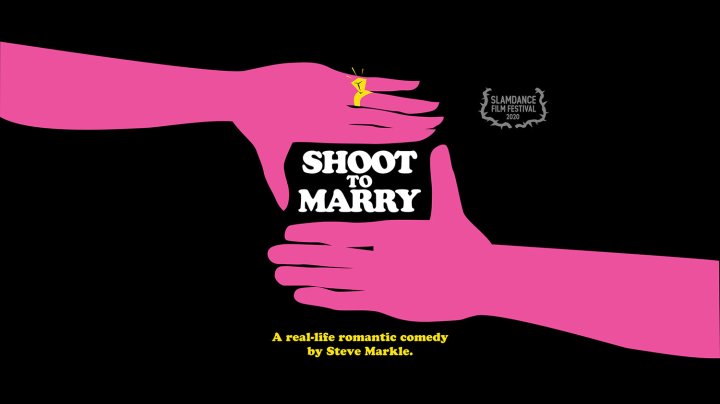 Heartbroken Filmmaker Steve Markle Focuses His Camera On Women To Film A Doc And Find The Love Of His Life.

The documentary is part of the Breakouts Selection, which showcases films by feature directors who demonstrate a determined vision of filmmaking that is instinctively becoming their own. Northern Banner Releasing (the Canadian distribution arm of Raven Banner Entertainment) just acquired the Canadian rights.

“Funny, reflective and utterly original, Shoot To Marry delivers laughs and heart. Markle’s film will be a winner with fans of indie docs, romantic comedies, and pretty much anyone who appreciates a great love story,” says Andrew Hunt of Northern Banner Releasing.

In this real-life romantic comedy, heartbroken and disillusioned documentary filmmaker Steve Markle focuses his camera on women with hopes of finding the love of his life. What begins as a quest for female companionship gradually becomes a wake-up call as Steve’s search for a wife leads him on an unexpected and poignant journey.

“The idea for the doc grew out of a deep desire to be married. I think spending your life with someone is beautiful,” says filmmaker Steve Markle. “The concept was to ask women about their lives, relationships and love and I thought who knows – if I film with enough women, maybe I’ll click with one of them?”

“After my previous relationship fell apart, I sat on the couch crying for weeks and months, feeling shitty about myself. The voice in my head fed me a constant stream of negative thoughts: You’re not loveable. You’re shit. You’re garbage,” recalls Steve Markle. “At a certain point I felt inspired to put my pain into art and create something. I grabbed my camera and started filming this documentary.”

Shoot To Marry was produced, written, shot, directed and edited by Steve Markle – virtually a one-man film crew over a five-year period.

Steve Markle is best known for writing, directing and starring in Camp Hollywood, the Sundance Channel doc about struggling performers living at a legendary Los Angeles fleabag. Markle starred in the hidden camera show You’ve Got A Friend exec-produced by Ashton Kutcher for MTV, and starred in the comedy series Testees for FX.

Northern Banner Releasing distributes quality, award-winning indie films. Past releases include the Cannes Un Certain Regard winner The Happiest Day in the Life of Olli Mäki, the Cannes Critics’ Week Grand Prize winner Mimosas, and Academy Award-nominated Embrace of the Serpent. Upcoming releases include the Oscar-shortlisted film The Painted Bird and the documentary Shoot To Marry, premiering at Slamdance 2020.

For more information about Shoot To Marry, visit the film’s official website: www.ShootToMarry.com.