Stage 32 Screenings Launches With Over 75 Films, Shorts and TV Pilots and  welcomes Fintage House as a Premium Partner! With Fintage’s assistance, we now have nearly 4,000 professionals who have been invited to join Stage 32 Screenings, watch the films and, if they desire, to connect with these talented filmmakers.

Last month, Stage 32, the world’s largest online platform for connecting and educating film, TV and new media creatives and professionals announced Stage 32 Screenings, a new platform intended to highlight filmmakers and screen films impacted by the cancellation or postponement of film festivals around the world to their network of thousands of executives and professionals.

Stage 32 announced that they will begin screenings of over 60 films including the Zeiss Cinematography and Final Draft Screenwriting Award winners from SXSW  starting on Tuesday April 21st, exclusively on www.stage32.com/screenings.

The goal of Stage 32 Screenings is to grant the displaced filmmakers screenings with a global audience of decision makers that can help further their careers and find sales and distribution solutions for their films. Stage 32 has invited thousands of professionals including sales agents, distributors, financiers, managers, agents, and other development executives who have worked with the company over the last 9 years to the platform. Interest has been high with many buyers and distributors requesting to be connected to the filmmakers immediately.

Filmmakers can choose whether to screen publicly to Stage 32’s global community of over 600,000 members and professionals worldwide or privately just to the professionals vetted by Stage 32. Screening privately will not affect a filmmaker’s screening eligibility for other festivals and there is no fee to participate.

“Stage 32 Screenings was born out of a need to help filmmakers impacted by global festival cancellations to play their films to our vast network of executives and professionals. If we’re being truthful, we have no idea when festivals will begin ramping up again and these filmmakers have created incredible films that deserve to be seen. Our platform is uniquely situated and equipped not only to screen these films but to do so to a concentrated, global audience of decision makers”  Stage 32 CEO, Richard Botto.

Among the films being screened include BEST SUMMER EVER, starring Maggie Gyllenhaal, Peter Saarsgard, Shannon DeVido​ and Benjamin Bratt, a musical about a young couple who unexpectedly find themselves at the same high school following a summer romance, which was made with a fully integrated cast and crew of people with and without disabilities. BEST SUMMER EVER writers Michael Parks Randa, Will Halby, Terra Mackintosh, Andrew Pilkington and Lauren Smitelli won the Final Draft Screenwriting Award at SXSW.

“Our filmmaking process was very inclusive, with a significant amount of cast and crew living with disability. Our goal is to change the perception of people with disabilities in the film and TV industry. We were so happy to get into SXSW and everything just fell apart. We’re thrilled to now be screening on Stage 32 Screenings because it finally feels like we’re all in this together and Stage 32 is putting the filmmakers first and assisting in helping us find the distribution we deserve,” said Andrew Pilkington who co-wrote and produced the film.

ECHOES OF THE INVISIBLE, directed by Steve Elkins, which won the Zeiss Cinematography Award at SXSW, is a feature documentary in which daring explorers embark upon seemingly impossible journeys into the most extreme environments on Earth to find the connective tissue between all things seen and unseen is also screening on Stage 32 Screenings.

“We have chosen to decline other offers to screen our film ECHOES OF THE INVISIBLE to instead screen it through Stage 32’s extensive network of distributors and buyers. Amazon offered a short window, with an unknown lump sum, and while we respected this opportunity, it was just not in line with our current sales strategy. Ultimately, we want ECHOES to have the best chance of finding distribution and to screen in front of professionals who might be able to help not only the filmmakers, but our crew as well. Stage 32 will allow that,” Producer Scott Cronan.

“The outpouring of support to Stage 32 Screenings has been overwhelming. We have heard from over 50 festival directors asking how they can get involved and well over 1000 filmmakers who have asked us to help them screen their films. In addition requests for professional accounts to screen these films are pouring in by the day. In these uncertain times, we’re thrilled to be offering these filmmakers some solace and our professionals an opportunity to keep their business running.” Richard Botto.

ECHOES OF THE INVISIBLE – (Still)

Logline: Daring explorers embark upon seemingly impossible journeys into the most extreme environments on Earth to find the connective tissue between all things seen and unseen.

Logline: A fresh and exhilarating take on the beloved teen musical genre featuring eight original songs and a fully integrated cast and crew of people with and without disabilities. 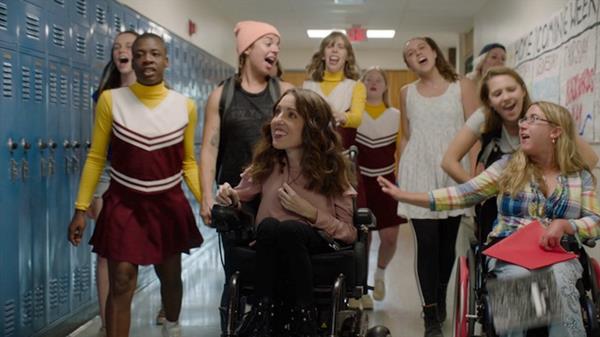 Stage 32 links entertainment industry creatives, professionals and executives globally. The platform is recognized throughout the industry as the leaders in film, TV and digital education and is the networking and education partner of organizations such as the American Film Market, the Cannes Film Festival Marche du Film and many other festivals, film commissions and film and television organizations around the world. Industry professionals, production companies and creatives use the platform’s script services to vet projects, assist with budgeting, and hone their material.

Founded in 2011 by Richard “RB” Botto, Stage 32 works with over 500 industry professionals and executives worldwide who provide education, instruction and professional opportunities for members of the platform. Stage 32 currently has over 1,200 hours of exclusive film, television and digital craft and business education in its library. Members of the Stage 32 community use the platform daily to build their network, incubate projects, take online webinars, classes and labs, find work, cast and crew their projects and for other professional pursuits. Stage 32 members range from talent on the rise to Emmy, BAFTA and Academy Award Winners.