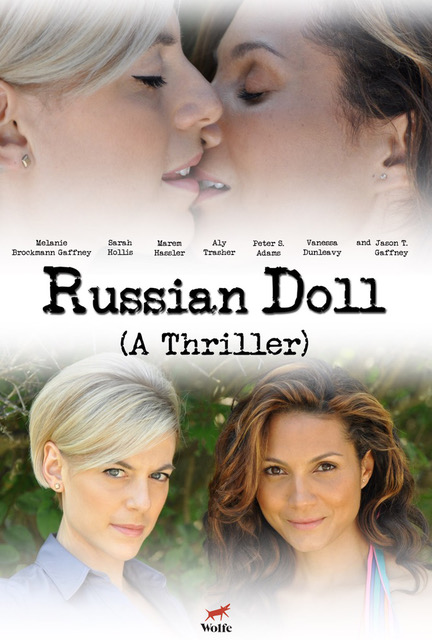 “Russian Doll” follows Viola Ames (Melanie Brockmann Gaffney), a veteran police detective who’s assigned to investigate the disappearance of a woman who stumbled upon a murder plot behind the scenes of an upcoming play called The Russian Doll. As opening night draws closer and closer, Viola and her partner, EJ (Sarah Hollis) are tasked with unraveling a twisted thread that will lead them to the identity of both the kidnapper and the murder suspect. All the while, Viola starts to develop romantic feelings for a new woman in her life – Faith (Marem Hassler), introduced to her via her mother. But Viola’s first wife died just a year prior, and her new feelings of attraction are clashing with her continuing feelings of grief over her loss.

It’s difficult to discuss the plot of this film without delving into spoiler territory. Suffice to say, the mystery that constitutes the A-plot is well-constructed, well-paced, cleverly written and suspenseful, gradually revealing one layer at a time and keeping you guessing until the last minute. The decisive piece of evidence that leads Viola to the one behind the murder plot is acquired in a rather contrived way, but that’s a minor complaint, and the story holds up beautifully otherwise.

And that’s a shame, because Viola isn’t an uninteresting character – far from it. She’s strong, but likable, displaying a persistently assertive disposition tempered with a delightful sense of humor and snark. I just wish the film could have given her and Faith more time to get to know each other and develop their relationship.

In spite of the B-plots flaws, however, the A-plot – the mystery – is more than worth the price of admission.

RUSSIAN DOLL will be released worldwide via Wolfe on DVD & VOD and across all digital platforms including iTunes, Vimeo On Demand and WolfeOnDemand.com, and many major retailers.

Founded in 1985 and now celebrating over 30 years as the largest exclusive distributor of lesbian, gay, bi and transgender (LGBT) films, Wolfe Video has released some of the most popular LGBT films of the last year, including: Sebastian; Just Charlie; Princess Cyd; Behind The Curtain: Todrick Hall and Cherry Pop. Over the last decade, Wolfe Video has partnered with the most creative voices in the global LGBT film community to bring memorable films to general audiences including the feature debut of Bianca Del Rio in Hurricane Bianca; Katherine Brooks’ romantic drama Loving Annabelle and Steven Williford and Paul Marcarelli’s The Green starring Jason Butler Harner and Cheyenne Jackson. Upcoming releases include Russian Doll; Hurricane Bianca: From Russia With Hate; Venus and Hard Paint. Wolfe’s library of beloved modern classics includes such acclaimed hits as Reaching For The Moon, Cloudburst, Undertow, and Big Eden. Wolfe’s complete motion picture library can be found at WolfeVideo.com as well as at national and digital retailers such as Amazon, Comcast, Charter, Hulu, iTunes, Netflix and WolfeOnDemand.com.