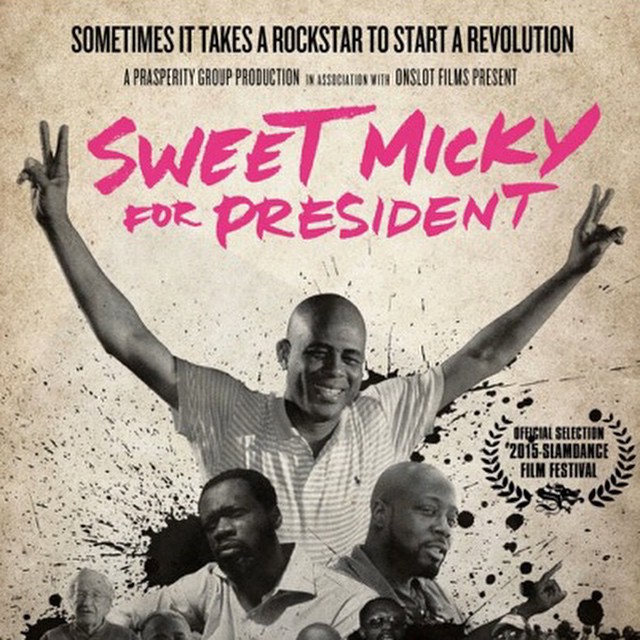 Director Ben Patterson and Writer Pras Michel (member of the Fugees) have combined forces to bring us a vivid and vibrant 21st Century snapshot of life in Haiti in their documentary, “Sweet Mickey for President”. The film focuses on the post 2010 earthquake campaign of Haitian pop music icon and populist and activist Michel Martelly (aka Sweet Mickey) as he seeks to become the third democratically elected President in Haiti’s tumultuous history as the first Black country to gain its independence. Michel and Patterson set the stage with black and white stills and film highlighting the passion and chaos that have been endemic throughout Haitian history since its declaration of independence from France in1804.

Michel Martelly as Sweet Mickey is the brightly plumed toucan/pied piper who becomes the people’s candidate out of their frustration with a long line of despotic dictators (the Duvalier’s) and well – intentioned but bureaucracy – bound professional politicians who appear overwhelmed by the task of rebuilding a nation from the ground up after centuries of benign neglect and exploitation by the Europeans and North Americans. Footage from Mickey’s stage performances, news footage of the controversy his performances created and going behind the scenes of his campaign show us how one talented musician struggles with becoming a successful candidate and statesman.

Using just the right amount of narration, Michel and Patterson deftly allow the story of Martelly’s candidacy and the election process to depict a power, depth and richness that is the wind beneath the wings of Haiti’s roller-coaster ride to a sustainable democracy. For added spice there are cameo appearances by a hugely diverse group of pro-Haitian advocates such as music superstar and Fugee bandmate Wyclef John ( who also becomes a presidential candidate and adds drama to the saga), actor and comedian Ben Stiller and former President Bill Clinton.

What will become of Haiti and its people? I have no idea. “Sweet Mickey for President” powerfully and poignantly suggests the best of Haiti’s story is yet to be. All speculation aside, I strongly encourage the reader to catch this film at a theatre near you and decide for yourself.

“Sweet Mickey for President” won the Grand Jury Prize and the Audience Award for Best Documentary at the 2015 Slamdance Film Festival. The Film also screened at The  2015 LA Film Fest